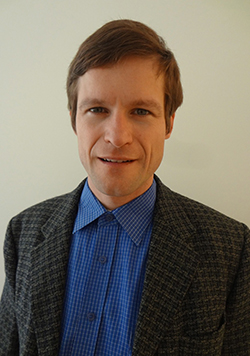 Some weeks ago, Daniele Puccinelli visited the Multimedia Communications Lab. He’s an experienced scientist in the field of wireless sensor networks. I took the chance to ask him some questions – what does he think about the future of the internet?

Daniele, thanks for your time. What do you think are good application scenarios for mobile ad hoc networks?

The phenomenal uptake of smartphones and their total dependency on the cellular infrastructure seem to have resulted in a general loss of interest in mobile ad hoc networks. The classic applications (battlefield and disaster scenarios) are still there; while they may no longer be hot research topics, they are still of interest to various actors.

Right now, concrete applications scenarios focus on offering connectivity in areas without cellular coverage, such as rural areas in developing countries or wilderness areas in developed countries (for instance, for emergency rescue operations).

Going forward, I believe that the rise of personal smart devices, along with the rise of the Internet of Things, will open up new possibilities for mobile ad hoc networking that will leverage the ever increasing density of smart devices and their resources. Examples of concrete applications beyond the traditional ones mentioned above still remain elusive at this point in time.

Sensors are part of our everyday life.  In the future, everyday objects will be equipped with sensors. For example our (future) cars are moving network nodes equipped with a plethora of sensors. How does this change our society?

The ever increasing volume of sensory data that can be collected by consumer devices is leading to a proliferation of business opportunities at every level of the food chain, ranging from independent app development to corporate business analytics.

Through their sensory inputs, smart devices become increasingly context-aware and are capable of making decisions on behalf of their owners. At the personal level, it will be increasingly possible to outsource tasks to personal mobile devices. The downside is an over-reliance on technology resulting in a gradual loss of basic skills and, eventually, serious incompetence. As a case in point, I wonder if those who use step-by-step routing directions on their smartphone to walk from A to B can still tell north from south.

On a larger scale, sensor-rich smart devices enable corporations to learn more and more about their customers. Replacing ‚corporations‘ with ‚governments‘ and ‚customers‘ with ‚citizens‘ hardly requires a leap of imagination, considering that younger generations seem to have lost the very concept of privacy.

What can be achieved with a better communication between sensors in a network? Where do you see limitations?

I see limitations in terms of energy. There have been serious advances in miniaturization and a significant level of research activity in energy harvesting, and I believe there will be a renaissance of the smart dust concept introduced by Kris Pister in the 1990s. Once smart dust delivers on its promise at a reasonable scale (it doesn’t have to be dust-scale, but it needs to be smaller than a mote), it will open up a world of opportunities for pervasive, fine-grained sensing. The main limitation will be energy, since it is unthinkable to power smart dust. I think that energy-efficient communication will be a hot topic again, and it will be much hotter than ever.

Sensors collect data. Data means to a certain extent control. How can science deal responsibly with this issue?

Science can gather data and garner meaning out of data, but using data responsibly falls under the purview of ethics. Big data ethics is a hot topic right now, and it should be taken seriously: the potential harm from data misuse can only grow with the data volume.